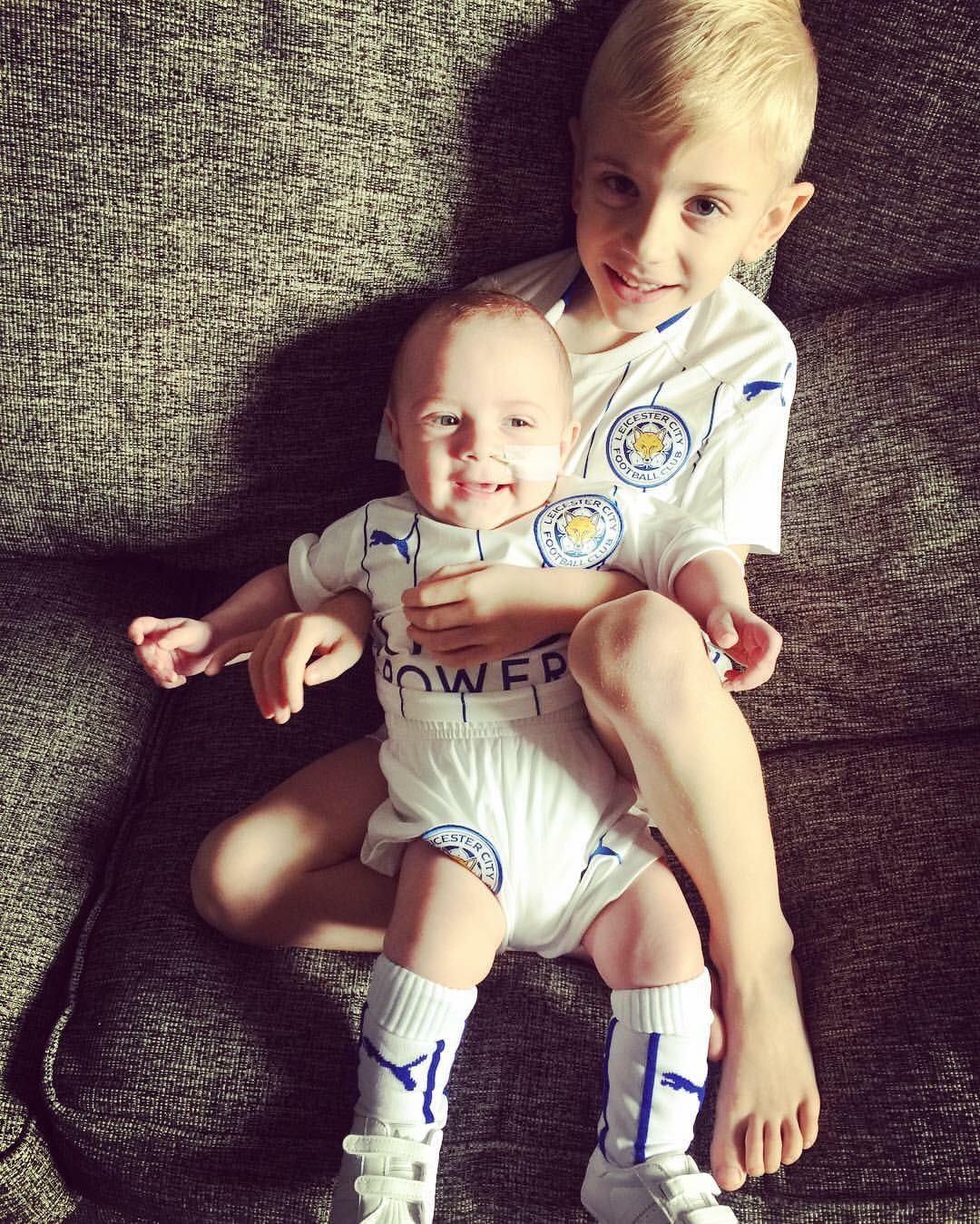 so we missed the four month update after a busy Christmas we just didn’t get the time so I will try and fit everything into this one.. over all Stanley is doing really well! development wise he’s where he should be he has found a new favourite word ‘ma ma’ and ‘dadada’ has started to creep in aswell, his new favourite thing is to blow raspberries, in fact he thinks he’s quite clever! I don’t think it will be much longer until he is sitting by himself and crawling and hopefully we have teeth sometime soon as everything seems to be going straight into his mouth!

We had clinic around four weeks ago and the team were happy with him, his chest sounded clear, he went back down to normal dose of antibiotics and the plan was to see them again four weeks later, however within a few days his cough had returned and he sounded pretty awful! I spoke with his nurse on the phone who checked if the swab samples they had taken in clinic had come back and they had, they were positive for RSV virus. to most people symptoms would be cold/cough and sore throat, it probably wouldn’t make you feel to great but doesn’t really do any harm, obviously to babies and children with low immune systems it can make them really poorly, antibiotics were back up to a treatment dose again and by the Monday we were asked to go in to check him over.

At this point it was just 6 days before Christmas so we had our fingers crossed that we could be sent home and thankfully we were! He was doing much better than expected and wasn’t working quite as hard as the team thought he perhaps might! So we got to have Christmas at home, we got to go and watch Alfie as the narrater in his school play which he was brilliant in! it was Stanley’s first Christmas and Alfie’s birthday on New Year’s Eve and his first as a big brother and they both loved it! Alfie was so excited to get his first brother card, infact it was all he mentioned maybe we shouldn’t have bothered with the presents ha! 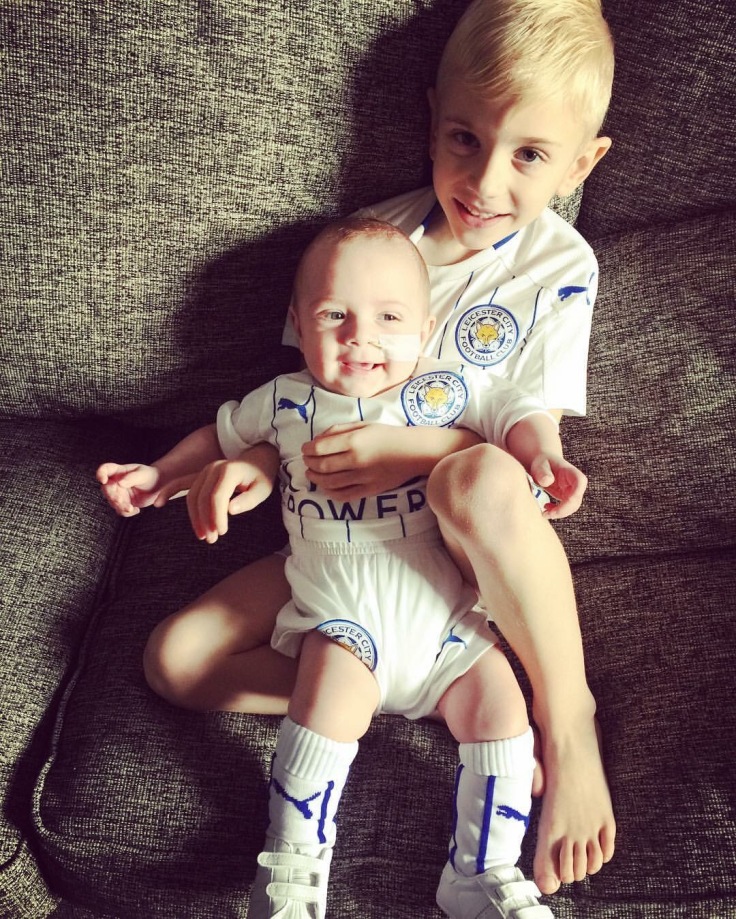 Alfie went back to school on the following Tuesday and by the Wednesday we were admitted again this time with a sickness bug!, thankfully only for 24 hours we managed to get back up to full feeds and came back home again, winter has proven to be horrible we have had five admissions now, one thing after another, once one virus is on board he seems to pick another up.
Stanley was due to have an operation the week before last which I wasn’t to keen on as it was meant to be on Friday the 13th! It was to look into the cause of his trouble with swallowing (hence the need for the feeding tube) and to also look into why he has been passing blood for nearly four months now. However the day before he was due to be admitted we had a phone call to say that a swab had come back and he had picked up an infection and had two viruses also. This meant that the team weren’t happy with putting him to sleep when he wasn’t 100% , although in general he has been quite well he’s not had much of a cough no temperatures but better to be safe and it wasn’t worth risking doing a procedure without him finishing a course of antibiotics, so it went ahead today instead!

So instead he was admitted last wednesday and started to have IV antibiotics. As with previous admissions getting access to veins has proven difficult, it took five cannulas on Wednesday before he had one that would work and stay put, several blood tests as blood was clotting as they couldn’t get a proper sample, he had another cannula put in in theatre along with a long line but managed to knock them both out less than 24 hours after! He then moved back to oral antibiotics so that he doesn’t have to keep going through the trauma of having needles. Although this didn’t last long – He looks like a little pin cushion bless him!

After quite abit of coordination 3 teams came together last Friday in theatre.. Stanley’s CF team, they took a swab from his lungs this will determine whether there is an bacteria sitting in his lungs that isn’t being picked up from cough swabs they did say he had quite a lot of secretions in his lungs which they have cleared now, this could be from the virus which they already knew he had they cleared these though, the gastro team had a look at his bowel also as at around 12 weeks old he started having blood in his nappies this hasn’t stopped since, in theatre it turns out the top half of his Bowel is completely fine, however the bottom half seems to have quite a few red patches of what looks to be inflammation it bleeds every time it’s touched which explains the blood in his nappies. there not quite sure what exactly it is so they have sent off biopsies and the results should hopefully be back within around two weeks,although we could possibly have some provisional results back next week and that might give the doctors a clue as to what’s happening. And then the ears nose and throat team found that he had a laryngeal cleft this is the same as what our eldest son Alfie has, the cleft in itself it’s extremely rare and so for two children to have it the odds would be so small- but hey our boys like to prove people wrong! 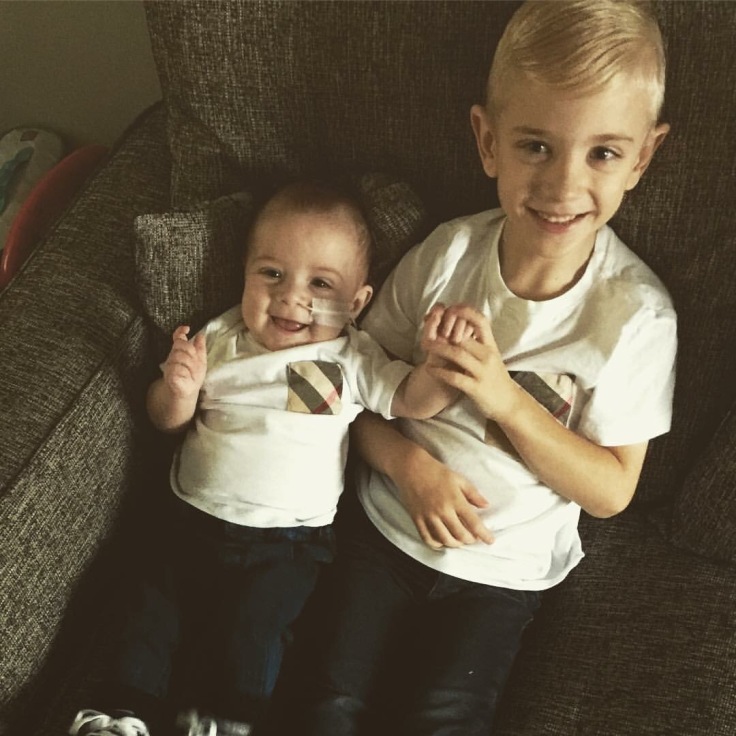 This would go some way to explaining why Stanley has had swallowing problems, his symptoms are pretty similar to Alfie at the same age, but we know with Alfie his symptoms don’t always add up to what they find so now genetics and neurology have asked to see both boys and they will start looking into if there is any genetic or neurological cause that what cause the symtoms that both boys have had.

Juggling both of the boys appointments now means we practically live at the hospital! but hopefully we are now getting closer into finding out what could be the cause of some of the problems we’ve had. We will keep you all posted! 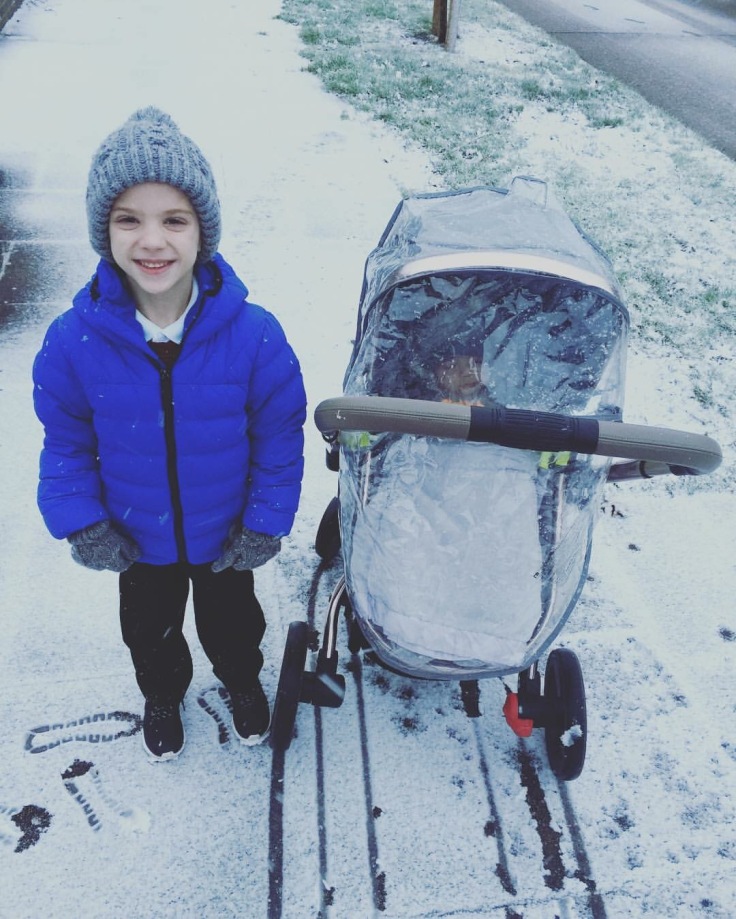 We have since had the results of Stanleys broncoscopy results and they weren’t good! In fact it was the call parents of children with cf dread! Stanley has pseudomonas, it was safe to say me and Jack were gutted, when your child picks up something you almost take it personally, it feels like your doing something wrong, I don’t think I’ve felt that sad about anything to do with cf since he was first diagnosed , in fact I think both of us felt the same. Pseudomonas is a bacteria that is all around in the environment. To me and you it causes no problems at all but for a person with cf to be swabbed positive with it isn’t good, it’s probably one the last things you want to be told they have.. it’s the one your warned about at diagnosis. As a person with cf has thick sticky mucus the bacteria can cling to the lungs more easily and then creates a home out of them! Once it’s there it is so hard to get rid of which is why it needs to be treated so aggressively starting with two weeks of iv antibiotics and then it will be around 12 months of treatment including nebulisers in order to try and get rid of it. we are now learning how to do IV antibiotics at home so that we can keep abit of normality for both of the boys, especially Alfie he is starting to get upset at Stanley being in hospital so we want to stay at home as much as we can. We can only hope this works as if not nipped in the bud now it can cause inflammation of the lungs which then causes them to be damaged and not be able to function as they should.

A new long line was placed in Stanleys ankle again on Friday evening and unfortunately has come out already, because gaining access to veins has been a big issue and so we’re now waiting on the cf team to see him tomorrow in order to make a decision on whether to contact the surgical team about having a portacath inserted which will be into his chest more than likely – its apparently quite common  for children with cf to have them but he is on the lower end of the spectrum age wise which is abit upsetting but at the same time if it means no more cannula after cannula being inserted it is in Stanleys best interest even if that does mean another trip to theatre – which we defiantly do not like! It will make it 21 theatre trips between the two boys, I’m sure they like to make me and Jack worry! 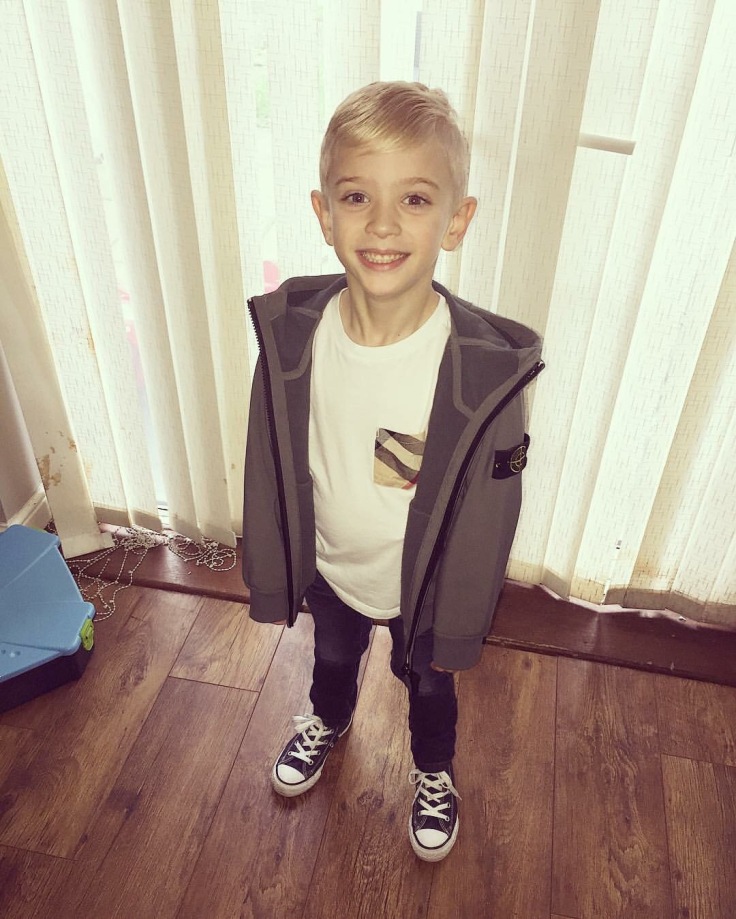 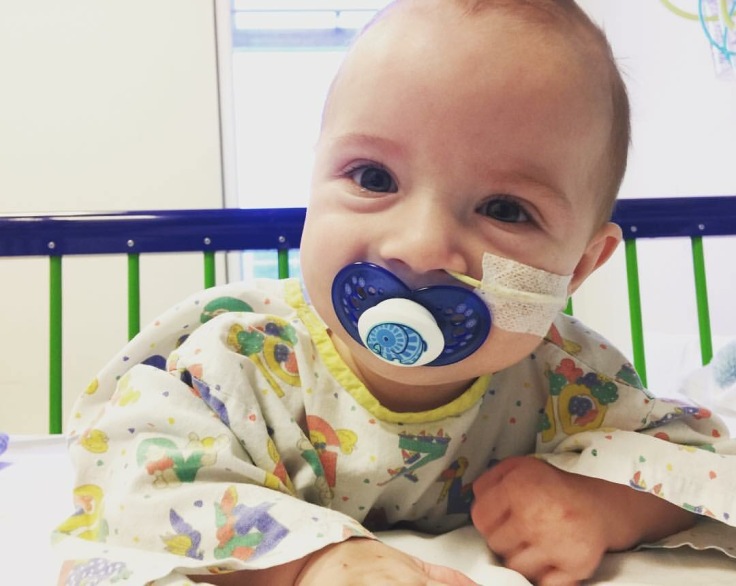 So now with this unexpected hospital stay we now have a busy few weeks with hospital and organising the last few bits for Stanley’s charity night on the 10th February! We have sold several tickets now and are close to the 200 mark of people that have said they will be attending, we hope everyone can make it and more! it’s for such a great cause! Please let us know if you would like tickets 💜💛 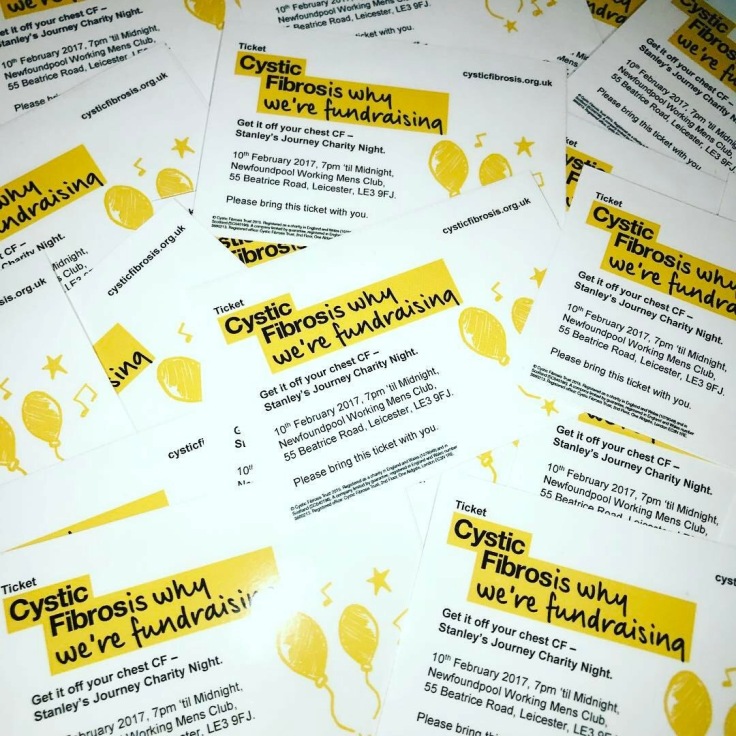